"Everyone is discovering the magic of origami and having fun."
— Princess Peach, Paper Mario: The Origami King

Princess Peach (ピーチ姫 ) is a recurring character in the Paper Mario series. She is the current reigning monarch of the Mushroom Kingdom. She is close friends with Toadsworth aswell with Mario and Luigi, though she and Mario share secretly a special romantic bond. She resides in her castle just north of Toad Town.

In Paper Mario, she is seen resting a bit from greeting all the guests out there at the Party, and having a chat at the balcony with Mario. The castle suddendly collapse/crumbles revealing Bowser's Castle underneath, after the Mario was thrown out of the window, she is forced to stay in her bedroom until Mario comes to save her. Twink, the star kid tells her that he comes from Star Haven to grant her wish (Peach wished for someone to come help), She first wishes for Twink to get the Star Rod back from Bowser, but realizes that Twink cannot do big wishes yet. After, she asks Twink to hand over a Lucky Star and tell Mario that she is fine and he shouldn't worry. Then, she remembers that the Minister told her there's a secret passage out of her room, she is spotted reading Bowser's diary and forced to go back to her room. She escapes with Twink to find out about Tubba Blubba throught the library. Peach and Twink secretly listens to conversations between guards. After that, she is seen listening to conversations between Bowser and Kammy Koopa. Then, she walks secretly to the Kitchen room to bake a cake in the castle in the middle of the night for Gourmet Guy to eat it, after that Gourmet Guy tells Peach and Twink that one of the Star Spirits are located at Mt. Lavalava (Lavalava Island). She is then spotted once again by Kammy Koopa and escorted back in her room. After winning/participating secretly at the 64th Trivia Quiz Rip-off, she receives a Sneaky Parasol that allows her to transform into anyone she's next to. Eventually she starts listening to Kammy Koopa, Kammy finds her to smell too good and unleashes a spell that turns her back to normal, she is then thrown back into her room. Eventually, Bowser enters her room and says that she will have the front view of him crushing Mario, suddendly Koopatrols ties her up and takes her back to the hall from her bedroom. When Mario entered the next room, she is seen tied up from the ceiling, and Bowser takes Peach with him on his Koopa Clown Car. At the end, Twink, the star kid saves Peach and fights Kammy Koopa with the Princess's wishes. To help Mario, Peach makes a wish to the Stars, and Mario takes the Star Rod back before the Arena collapses. The Star Spirits saves Peach and Mario from falling, and hands over the Star Road back to the Star Spirits, then celebrates the party at Peach's Castle. 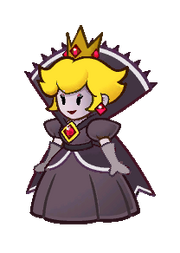 After a deep slumber, Peach wakes up shocked about the situation she is in. When Count Bleck asked Peach if she takes Bowser to be her lawfully wedded husband until her games are over. She immediatly asks what is going on, wich the response is that this is her wedding. She insults Bowser and critizes of how the Dress is awful, but gets attacked. Eventually after saying no multiple times, she accepts and the Chaos Hearts appear to open the void. Later, she screams for help while being transported to Bowser's Castle due to being taken by Count Bleck, the chosen executor of the Dark Prognosticus. He refuses to hand over the Princess, and says that she will be brought back to Caste Beck and used to destroys all worlds. Peach then suddendly gets sucked in aswell for the others in the Castle Bleck, she wakes up and finds herself lost with some other koopas, such as Private Koopa. After walking within the walls of the castle, they find themselves stuck in a dead end, but when they turned back Nastasia prepares to attack them. Private Koopa claims that he is trained in situations like this and Peach takes cover, but she proceeded to brainwash him easily, and joins Nastasia's army of brainwashed enemies. She then goes on to brainwash Peach, but Peach suddendly flips and dissapears. Peach does not make an appearance for a while, but apparently she "fell out of nowhere" to Flipside. Merlon TO BE CONTINUED, PLEASE DO NOT EDIT

The story begins one evening during a special holiday called the "Sticker Fest", the Sticker Fest is a celebration of stickers that occurs every year in the Mushroom Kingdom, alongside the peaceful town of Decalburg. Every special nights, Sticker Comets falls from beyond the sky, and if everyone concentrates deeply into their wishes, it is said in the legend that their wishes will come true. Once the Sticker Comet lands to the celebration, Bowser invades the celebration with his army of Koopa Troopas and Goombas to steal the Sticker Comet away from them. Three Toads tried to pull Bowser away from the Sticker Comet, but when Bowser jumped to it, it flew to the sky and exploded into pieces of Royal Stickers all across regions. Shortly after the fight between Mario and Bowser with one of the Royal Stickers, Toads are missing and Peach gets kidnapped by Bowser to his sky castle. Once Mario entered the main room of Bowser's Sky Castle in World 6, Peach is seen sticked with tapes on a chain. Right when Mario and Kersti was about to save Peach while Bowser is not looking around, he comes in and put her in a long hall behind him. Once Giant Bowser alongside the Royal Sticker is defeated, Mario peels the tape off and saves her, she thanks Mario deeply for saving her after all this chaos, she then asks Mario what is his wish, and tells him to use the power of one of the Royal Stickers to grant his wish. Peach finally announces the rebirth of the Sticker Fest, and Bowser joins in with Mario, Peach and Kersti, finishing off with all of them laughing at the Sticker Fest in Decalburg.

In Color Splash, Princess Peach is first seen going to Prism Island to investigate the strange disappearance of her Toads. For a portion of the game, she can be found in the inn and will heal Mario whenever he interacts with her. Halfway through, she is once again captured by Bowser. She is not seen again until the end of the game when Mario rescues her. However, she does leave Mario videos through Holo Peaches which are scattered along his quest.

In The Origami King, Peach is seen as an origami character thought to be controlled by King Olly. She asks Mario if he will crease himself and be reborn, just like her but then says it doesn't matter as his answers are paper thin.

Princess Peach could be considered the ideal model of a princess. No matter what situation she finds herself in, she retains her poise and grace. She is just as comfortable, however, exploring the world with Mario and friends, showing courage and spunk befitting her adventurous nature. She is kind and compassionate, often putting the needs of others before her own. Finally, Princess Peach is very relaxed; the rare occasions that she loses her composure, however, often result in a fit of indignant verbal thrashings.

Princess Peach is moderately tall, though still standing nearly a head above Mario. She has a slender figure, which she modestly covers in her trademark pink dress. Her elegant white elbow-length gloves and crown complete the ensemble, neatly accenting her flowing blonde hair. She has a sweet disposition and is rarely seen without a smile on her face.

1/9
Community content is available under CC-BY-SA unless otherwise noted.
Advertisement