Mario's fourth party member. A mailman who can deliver letters to recipients all over the Mushroom Kingdom. Can attack airborne and ground enemies.

Parakarry is a cyan Paratroopa Partner in the first Paper Mario. He is a citizen of the Mushroom Kingdom and works at the Post Office in Toad Town along with the Postmaster, delivering letters to recipients all over the world. He is known for being a clumsy, slow postman who frequently loses his letters. In fact, in the game's ending, his boss even questions Mario on how Parakarry was able to make himself useful on his adventure.

His mainline in the series is when he shouts "Mail Call!", and "Another letter duly delivered, a postman's job is never done." His main objective is to find all of the letters he has dropped in the Mushroom Kingdom and deliver them to their owner.

Not counting the game's intro where he's delivering the Mario Bros. a letter from Princess Peach, Parakarry is first met on Mt. Rugged (optional in the Post Office before Chapter 2) bumping into Mario. He asks him (Mario) to help find three missing letters he dropped on Mt. Rugged. After finding all three and rightfully returning them to him, Parakarry tells Mario that he didn't just lose letters on the mountain, but all over the Mushroom Kingdom. After hearing this, he tells Mario that since he is good at finding letters, he will join up with him on his quest to find all his missing letters and make himself of use in defeating Bowser. The player can then decide whether or not to take him. If they choose not to, he will sit there in place until the player changes his / her mind. In the end, players are going to have to take him due to a large gap that Mario needs to cross with Parakarry's help.

Parakarry can deliver letters to people all across the Mushroom Kingdom as long as he is present with Mario while he's talking to the rightful recipient.

In Paper Mario's ending, Parakarry sets off again on his job delivering letters to residents all over the Mushroom Kingdom. He is seen alone, travelling the Mushroom Kingdom, delivering to all of the Party Members an invitation to Princess Peach's party, ending with Mario. He states himself to Luigi that he also received an invitation and hopes to see the Mario Bros. there as well.

Parakarry cameos in the prologue, delivering a letter from Princess Peach to Mario. And yet again, another adventure starts. This is similar to the intro of Paper Mario. After this, he is not seen again.

Parakarry does not make an appearance in person in Super Paper Mario due to Princess Peach not sending a letter to the Mario Bros residence. Instead, his role is taken by a Toad. But he appears as a Catch Card found in Room 50 in the Flopside Pit of 100 Trials.

Parakarry makes a brief cameo in a letter found in the trash pile in world 5-1.

Parakarry looks just like an ordinary enemy Paratroopa. But he appears with a cyan shell and is given a brown flight headgear, shoes, and bag.

Parakarry's ability is being able to carry Mario over ledges he can't jump over, but only lasts for a limited time.

Not much is known about Parakarry's personality. Though it is hinted on him inflict of being a coward. Shown when Mario and his Partners sneak in Tubba Blubba's room to steal a key to find his weakness. Out of all the partners that react when Tubba Blubba wakes up, Parakarry is the only one who has the fonts shake when he speaks. Which indicates someone who is scared or afraid. Goombario, even states when battling Lee, disguised as Parakarry, that he is the most intimidating one in their party. Though, when battling a Duplighost disguised as him, Goombario comments that "He looks even more intelligent as an enemy." and tells Mario not to underestimate him as the fake Parakarry: "Looks pretty serious." Meaning the real Parakarry can be viewed in both a coward and intelligent. He's also very optimistic.

Description: Parakarry earned his fame from the original Paper Mario. He's the most fearsome mail carrier of them all!

In Mario Kart Double Dash!!, there's a mail truck in Mushroom City and Mushroom Bridge called The Parakarry Mail Truck. Which is a homage to Parakarry.

In Animal Crossing: City Folk, sometimes when the player is asked to make a quick delivery from a citizen to another in their town when the player reaches the rightful receiver, sometimes they are given the choice to say "Mail Call!", which could be a reference to Parakarry.

Parakarry's sprite as he appears in Paper Mario 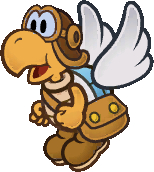 Parakarry as he appears in Paper Mario: The Thousand-Year Door 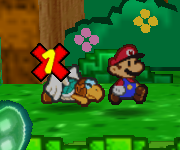