The game was intially announced at the Nintendo Conference at the Electronic Entertainament Expo (E3) 2010 on June 15th, 2010. Unlike the side-scrolling gameplay of its predecessor, Paper Mario: Sticker Star returns to the series' roots and focuses on the RPG-style gameplay established in the original  Paper Mario for the Nintendo 64.

During the game, players take control of the titular character Mario as he explores the overworld and challenges enemies into RPG turn-based battles, as well as obtaining items and power-ups, solving puzzles, etc.

At the annual Sticker Festival, an event in which citizens gather to view the passing of the Sticker Comet (which is said to fulfill wishes), Bowser and his troops intercept the celebration and successfully stole the comet. After an intense struggle, Bowser is flung onto the comet, causing it to scatter into six individual pieces across the Mushroom Kingdom. Mario attempts to duel Bowser, but is inevitably overpowered.

Mario later re-awakens after the devastation and is entrusted to find all six pieces with the help of the sticker fairy Kersti. They start off in the town of Decalburg and travel throughout the land to defeat Bowser's underlings and obtain the pieces.

The game focuses on Mario traveling the overworld and battling enemies to progress and collect coins. Outside of battle, Mario collects a variety of stickers (which are essential throughout the game) and items and overcomes obstacles, such as bypassing a giant Wiggler or navigating a maze of playing cards.

During battle, Mario can either jump on his enemies or attack them with his hammer, as well as use stickers, items, and power-ups to subdue them. Battle stages have also been given a more three-dimensional depth than seen in the first two installments. Some elements of the game are set in a two-dimensional platform, similar to Super Paper Mario.

There are 64 things to find in Paper Mario Sticker Star with various uses. For a complete list, see the page: Things in Sticker Star

Mario dueling a Koopa and Goomba. 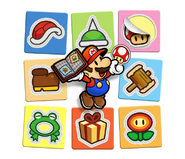 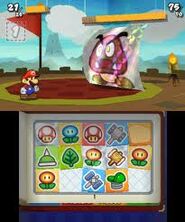