Jumping attacks generally, throwing rubees back at her

"You DUMMIES! The only reason I'm HERE is to get in the way!"
— Mimi

Mimi is one of the main antagonists in Super Paper Mario. She is a minion of Count Bleck. Her most notable power is her shapeshifting ability, which she uses to mimic the appearance of characters such as Bowser, Merlee, and King Sammer.

Mimi's first appearance in Super Paper Mario is during the Bleck interlude before the beginning of Chapter 1, though she is not seen without a disguise until Chapter 2. During the interlude, Mimi impersonates O'Chunks, but switches to Count Bleck after O'Chunks enters the room and begins to scold him. Count Bleck compliments her appearance, calling her "almost as dapper as Count Bleck." Flushed, Mimi accepts the compliment after happily swapping into Princess Peach and calling "hanging out with the Count" her idea of a perfect world. Dimentio then interjects, remarking that he thought Mimi's ideal world was a gem-filled pool with hunky lifeguards. Angered, Mimi shifts into Bowser and timidly asks if Dimentio has been reading her diary.

Mimi's first encounter with Mario and co. is during Chapter 2-2 (Merlee's Mansion) where she poses as Merlee's handmaid. Mimi tells Mario and his friends that Merlee is waiting for them in the farthest room on the first floor. Before letting them move forward, she also tells them to not enter any of the other rooms. This turns out to be a trap, as after reaching the end of the designated room and pressing the button, spikes slowly come down from the ceiling and the windows are sealed. The other rooms are also filled with traps that she presumably placed. After finding the key to the lower right-hand door and freeing the Gnaw, it immediately chases Mimi out of the room and into another part of the mansion. Tippi then has suspicions about Mimi, believing that she may have ulterior motives.

Mimi then appears during Chapter 2-3. After the Mario and co. accidentally shatter a small vase, Mimi comes into the room furiously, claiming it to be her "most favoritest vase." She then tells them it had costed 1,000,000 rubees, and demands that they pay for it. When Tippi tells Mimi that Mario only carries coins, Mimi says she will "SPIT on their coins" and tells them they must work to pay off the Rubee debt. Finally, she walks away after telling them to "ENJOY LABOR!" After working off the debt completely (using the rubees found in her safe), Mimi becomes shocked, as the debt was intended to be impossible to pay off. She then reveals that it was a curse she placed on the mansion, enslaving visitors to work for her. She then explodes, presumably due to the lifting of the curse. This would, however, not be the end of Mimi.

During Chapter 2-4 (Merlee's Basement), Mimi is first encountered in the form of Merlee, claiming that she has the Pure Heart ready to give to Mario under the condition that he pays her 10,000,000 Rubees. She then asks that they sign for it. If the deal is accepted, the real Merlee telepathically communicates with Mario and warns him that the Merlee they are speaking to is a fake. If the offer is declined, Mimi adds several other bonuses alongside the Pure Heart. The first is a rubee loan that they can work off, the second is a Super Mega Ultra Shroom, and the third is a Pixl named "Breadward." After all offers are declined, Mimi returns to her girl form, then reveals that she works for Count Bleck. Mimi then turns into her "true form," an invincible, spider-like creature. She chases Mario and his friends throughout the basement up until they enter a women's restroom. In there, they find the real Merlee hiding in one of the stalls, but Mimi quickly comes barging in and transforms into Merlee in a flash of light. Since Mario cannot determine who is the real Merlee, a game show is initiated called the "That's My Merlee!" show. Mario gets to ask both of the Merlees five questions, then must determine which is the real one based on the information he is given. After choosing the real one, ( Look for flies! ) Mimi returns to her spider-form, and a boss fight starts. Since she is invincible, Mario must wait for Merlee to begin cheering, as her powers remove Mimi's protection. Once Mimi is defeated, she flees and is not seen again by Mario and co. for several chapters.

At the very end of Chapter 3, Mimi appears during the Count Bleck interlude. She does not say anything important, only chanting "HAIL BLECK!" alongside the other minions near the end of the scene.

Mimi once again appears during the Count Bleck interlude. During Mr. L's introduction, he insults the other minions by calling them "juniors" for losing against the heroes, and Mimi angrily tells him that he also lost to the heroes, considering him the junior. Mr. L gives the excuse that he was only scouting them and that he will defeat them next time. After Mr. L leaves, Count Bleck assigns O'Chunks and Dimentio new missions, leaving Mimi to upsettingly remark that she is left out of the fun.

During the Chapter 5 Bleck interlude, Mimi and Mr. L anxiously await a new mission, meanwhile, Nastasia tells them to stay put until Count Bleck returns. After Nastasia leaves, however, Dimentio encourages them to impress the Count and defeat Mario, so both of them leave to confront the hero.

Mimi is once again encountered by Mario and the other heroes in Chapter 6-2, where she impersonates King Sammer. As the king, she tells them that the Pure Heart is waiting for them up ahead in a large chest. When opened, the chest explodes, though the gang is unharmed by the explosion. Disappointed that they did not get killed by the bomb, Mimi reveals herself and fights Mario. After being defeated, she reveals she was only a distraction, as the void was quickly engulfing the Sammer's Kingdom.

During the Bleck interlude, she prepares to defend Castle Bleck alongside the other minions.

Mimi is encountered several times throughout Chapter 8-2. The first time, she appears as Merlon and insists they hit a certain! Block. Like most of her tricks, this turns out to be a trap and drops them into a pit. After this section, she once again takes the form of Merlee, asking the heroes what they fear the most. The first set of choices are a Goomba, Clubba, or an Ultra Shroom. The second are Fuzzies, Hammer Bros, or a Thunder Rage. The last ones are an Amazy Dayzee, Francis, or a Cooking Mistake. Whichever is chosen is spawned by Mimi in the next three rooms. After passing all the trials, Mimi starts insulting the group, particularly Peach. Peach then tells Mario and Luigi to go on, and she will handle Mimi. After defeating Mimi on her own, the floor collapses and Peach is left hanging on the edge, clenching Mimi with her other hand. Peach is unable to hold on, and they both fall into the pit after several quakes. Presumed to be dead, she returns alongside Bowser, O'Chunks, and Peach, near the end of Chapter 8-4. She defends Count Bleck in Dimension D after Dimentio's transformation in Super Dimentio and is partially responsible for the rejuvenation of the Pure Hearts due to her transmitted love for Count Bleck alongside the other minions.

Mimi now resides in Merlee's Mansion, where she has gotten an actual job as a maid for Merlee. Due to Merlee moving into Flopside, Mimi decides to turn the mansion in a "stable of cutie pies" (attractive men). Tipptron's tattle also reveals that she is raising funds for a "Cutie-Pie Video Game" and a "Cutie-Pie Cafe." It is unknown as to whether Mimi actually goes through with these ideas.

One of the best attack strategies for Mimi is to use Princess Peach and hide under her parasol until Mimi stops attacking. You are impervious in this form, so Mimi cannot hit you. This also works on her wave attack as you just bounce off the top of the waning Rubees.

You fight her three times. You face her as the Boss of Chapter 2-4. The battle takes place in a lady's bathroom in Merlee's basement. She starts the battle Invincible, but Merlee's cheers break the invincibility. You face her a second time in 6-2, where she is in her normal girl form. She loses but reveals that she was just wasting your time. Peach does her final battle against her in 8-2.

Mimi in her Spider form. 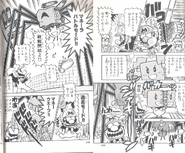