"Had enough Dimentio!? I didn't need my superstar Bro to take you on!"
— Luigi

He's Luigi. I don't have to say anything about him, do I? He's your brother!

Luigi, Mario's younger brother, is a recurring character in the Paper Mario series. He is also a character frequently appearing in the Mario series overall. He appears as in NPC throughout most of the series, but makes his first (and only) appearance as a playable character in Super Paper Mario.

In Paper Mario, Luigi spends most of his time at the Mario Bros.' house.  Having narrowly escaped Princess Peach's castle before it was lifted into the sky, he has little to do but stay home and protect the house. He keeps a diary detailing Mario's adventures (and his jealousy for Mario's luck), which he hides beneath the floorboard of their room. He was one of the people that powered up the stars with his wish (Which is to sleep on the top bunk.) During the game's finale, Luigi leads the parade celebrating Peach's safe return.

In The Thousand-Year Door, Luigi goes on his own adventure while Mario is away. Luigi is recruited by the leaders of the Waffle Kingdom after Princess Eclair is kidnapped by the evil Chestnut King. During breaks in his adventure, he stays in Rogueport, where Mario can hear stories about Luigi's continuing adventures in the Waffle Kingdom. He even acquires a party of his own, composed mostly of variations of common series enemies.  After Mario's quest is over, Luigi returns to Rogueport, where his adventures are publicized in the Super Luigi series of items.

In Super Paper Mario, Luigi appears as a playable member of Mario's party. Before joining the party, however, Luigi is captured and controlled by Count Bleck. This capture leads to Luigi's transformation into Mr. L, a recurring enemy throughout the game. Once Mario finally defeats him (and his vehicle of choice, the Brobot L-Type) in battle, however, Luigi comes to his senses and becomes a full member of Mario's team. During the final battle with Count Bleck, Luigi is once again captured, only this time by the scheming Dimentio. Dimentio then merges himself, Luigi, and the Chaos Heart to form Super Dimentio. Nevertheless, after the battle, Luigi is rescued once more and returns to Mario's party until their next adventure.

In Sticker Star, Luigi makes multiple cameo appearances in the environment and is able to be interacted with using Kersti's Paperize ability (Luigi is found in the boss stage of a world, usually in the background).

Paper Luigi is absent unlike the other cast members such as his brother, Bowser and the princess. However, he later appears once the player completes the game in the music player where he is shown relaxing on the beach and listening to music, while his 3D counterpart and the Mario duo are shown running in the background.

Luigi can be found in several locations in Color Splash around Prism Island, where Mario can use cutout to find him. But his most notable appearance is near the end of the game before the final area, where he uses his kart to bring Mario and Huey to Black Bowser's Castle (Huey makes a reference to the Luigi's "Death Stare" from Mario Kart 8).

In Origami King, he drives his brother to Peach's Castle at the beginning of the game. Then, when the castle gets lifted up, he gets stuck in a wall that didn't get lifted. He then goes and looks for the key to Peach's Castle, so Mario can get in. In the blue streamer world, he gets stuck in the gears of The House of Tricky Ninjas after swiping the Master Key for Shogun Studios thinking it was the right key. He then gets trapped in the Lamp Scam in the yellow streamer area after swiping a key for the hotel thinking it's the right key. After that, he takes the diamond key from Full Moon Island thinking that that was the right key, then sunbathes on Mushroom Island until Mario arrives. He then glides to Peach's Castle when Mario gets there to tell him he couldn't find the key across the entire game. But Mario finds it lodged in his Kart's exhaust pipe.

Luigi is best described as the "underdog" of the Mario Bros., often going unnoticed due to his reluctant nature. He is often slightly cowardly and is terrified of ghosts according to his diary. Nevertheless, Luigi musters his courage for a couple of adventures in the Paper Mario series, showing bravery and determination when it is needed. Luigi is generally easygoing and is very kind and considerate to those around him. He is certainly jealous of Mario's success; however, he does not let that jealousy get in the way of their good relationship. It is revealed at the end of Paper Mario that he wishes that he could sleep at the top bed.

In The Thousand-Year Door, he is shown to be arrogant and somewhat of a liar, slightly exaggerating his stories to make himself look more heroic. Some of his partners show incredible disdain for Luigi and some of them, like Blooey the Blooper, only stick around because he owed them a debt.

Luigi is similar in appearance to Mario, wearing the same trademark overalls, boots, and gloves. Unlike his big brother, however, Luigi sports a green shirt and hat, slightly reminiscent of his jealousy of Mario; it also reflects his more reserved status of the two brothers. Finally, Luigi stands slightly taller than Mario. He is also slightly thinner as well.

Throughout much of the Paper Mario series, Luigi is non-playable and thus does not have any considerable abilities during those times. Once he joins the adventure in Super Paper Mario, however, his natural talent becomes apparent. While exploring, Luigi has a much taller jump than his brother Mario. When he charges that jump, though, he is able to jump far higher than he can otherwise, doing much more damage as well.

Luigi in his parade outfit. 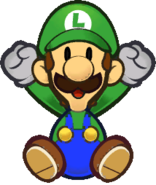