(as a Catch Card)

"“Did you know...there are good Goombas and bad Goombas? A bad Goomba will try to pick a fight with us the second it spots us.""
— Goombario

Goombario is a young adventure loving Goomba. Unlike the Goombas that are part of the Koopa Troop who despise Mario, he is a big fan and wishes to be just like him. He is the first Goomba (including his family) not be loyal to Bowser, and wish to bring peace to the Mushroom Kingdom. He has studied self defense from the books made by the masters and listened to advices from his father Goompapa and his grandfather Goompa so he can one day, set off on an adventure of his own. He eventually becomes the first of Mario's party members in Paper Mario. His role is later taken by Goombella in its sequel, Paper Mario: The Thousand Year Door. By Tippi and Tiptron in Super Paper Mario, by Kersti in Paper Mario: Sticker Star, and by Huey in Paper Mario: Color Splash.

When Mario falls into Goomba Village at the start of Paper Mario, Mario is found in the nearby forest by Goombaria. Panicking, Goombaria then yells to Goompapa, Goompa, and Goombario to help carry Mario and rest him in a Toad House. Three days pass, and Mario finally wakes up and tells the Toad and the rest of the Goomba family that he needs to head to the Shooting Star Summit. Just as Mario's about to leave, and Goompapa's about to finish fixing the gate (caused from the earthquake of Peach's Castle being taken by Bowser's Castle) out of Goomba Village, Kammy Koopa appears and blocks the path with a yellow block. Goompapa has a fit for having to re-fix the gate again and tells Mario to ask Goompa to lend him his hammer. With it, he can smash the block and head off to the Shooting Star Summit just past Toad town. Just as Mario enters where Goompa is, he notices the veranda is missing and falls off. There, he meets Goompa in the forest below Goomba Village. After finding the hammer and returning to Goomba Village, Goompa lends Mario a badge and suggests that Goombario should accompany him on his adventure. Goombario then happily accepts.

In the epilogue of Paper Mario, Goombario returns home to his family to live in peace. He is seen playing in their front yard with his sister, Goombaria. Afterwards, Parakarry appears and delivers a letter to Goombario. He tells him that it's an invitation to Princess Peach's party. Goombario quickly reads and notices it has her signature and gives a farewell to Parakarry as he leaves.

Goombario was supposed to make some sort of cameo in Paper Mario: The Thousand Year Door, perhaps aiding Luigi on his adventure to the Waffle Kingdom. It is unknown what he was going to be used for, and he was scrapped in the final along with the rest of the original partners (excluding Parakarry and Lady Bow). His replacement goomba partner was Goombella.

In Super Paper Mario, Goombario is in some photos along with the other party members in the Paper Mario History at Mario's House. Goombario also appears as a catch card found on the twentieth floor of the Flopside Pit of 100 Trials.

Goombario's appearance looks just like a normal enemy Goomba with a few different features. He wears a blue cap, has less bushy eyebrows, a less angry expression, a pair of blushes on his cheeks, and squared teeth (rather than the fangs of normal goombas).

By pressing C-Down, Goombario can use his tattle ability to explain where Mario is and tell him about the people they meet. He will occasionally break the fourth wall and his tattles seem to indicate a friendly rivalry with Kooper.

Goombario will tell in some of tattles that he has affections for some female NPCs he comes across such Merlee, Merluvlee, Vanna T. and Misstar. He also states that he would like an Albino Dino for a pet.

You were a lot stronger than you looked. We figured you were just some Punk Goomba hanging around with Mario. Anyway, you proved yourself to us. And you showed us that being as good is as important as being strong. So... When you come back, do you think maybe we could be...friends? Please say yes! We'll be waiting!

How goes the adventure with Mario? Is it fun? Are you being a brave Goomba? Remember to relish your time out in the wide world. Grow wise from your travels. I wish to the Stars that your adventure will prove to be a fruitful one. If you can, drop in on us old folks now and again. Gooma misses you terribly. I'm looking forward to seeing you as a grown-up.

Dear Goombario, How are you, my cute little Goombario? We're all doing fine here. I hope your Tattle ability has finally become useful. Stop by whenever you get the chance. We all miss you. Good luck my little Goomnut! I'll be thinking of you.

Card Description: Mario and Goombario go all the way back to Paper Mario. Enemies suffer when he uses his head.

While Goombario himself does not make an appearance in person, nor is a playable character, his name will sometimes appear in the score chart of Mario Golf: Toadstool Tour in tournament mode, along with the rest of the unseen characters. 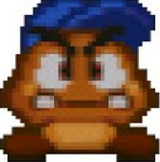 Goombario as he appears in Paper Mario.